Born in 1997, in Dijon, France
Lives and works in Paris, France
Cofounder and artist resident at Wonder/ Fortin

• Bonjour Bonjour, curated by resident•e•s from the Wonder, Wonder/Fortin, Clichy

• In 2020, while strolling around the Villa Arson in the St-Sylvestre district, I came across an A5 paper folded in four. It was a coloured pencil drawing entitled VOL CAN. I fell for it instantly. It has hung in every room I have lived in ever since. Surrounded by posters and other framed items, it was displayed rudimentarily, its corners embellished with four pieces of painters’ tape. This hanging allows for the drawing to be moved as I please. I’ve been reflecting upon it as I consider at it every morning. It is an object that confirms my choice to be a drawer. If compared to the formats that surround me, it is a small drawing. But it has authority. The space between these two syllables pushes me shout this word: VOL CAN. The pencil strokes are frantic, frantic but intuitive, and to me, this drawing is full of a very lively energy. The strength of being part of the world is awakened by it: expressing what one sees, expressing what one draws. It implies language as sound, the letters are present as forms, the drawing as sound. I regularly ask myself what is legible in my writing, if what is audible when I speak, and particularly if anything is visible in both. Everyone hears the succession of their own words differently. I have often felt like I was stuttering, struggle with words, holding onto sounds between my lips. It is time to take onomatopoeia, the tongue twisters, the small and large sounds between words seriously. My research around drawing and writing explores the tension of the written word. I have built my practice around anecdotes, innuendos, and puns. Gesture and words are intimately linked. I would like to de-hierarchise the relationship we have with words. Can you write a sigh ? Phewwww or a yawn, Ffffpppppppaaaah, and draw swear words ? This exercise consisting of working on the development of one’s own language, without grating hegemony to one, is intimately linked to drawing. My research into drawing and language is influenced by the work of visual artists such as Camilia Oliveira Faircloug, Katrin Ströbel, Walter Swennen, Philip Guston, Sarah Tritz, Lily Van Der Stokker, David Shrigley, Valentine Schlegel, Agnès Thurnauer, Emmanuel Hocquard… And a few others whose practice affects me for their relationship between the text and the image. Ecrire en dessinant. Quand la langue cherche son autre (Edited by Andrea Bellini and Sarah Lombardi) A terra incognita where the simple arabesque, the automatism, the repeated sign and the scribble make «sense» in an extra-linguistic dimension, but also existential, aesthetic and conceptual.
VOL CAN is the starting point of my work of drawing and letters, words, of what is implyed when we don’t say it. Like a force that comes from within. The typography and the volumes of onomatopoeia impose silence on language, and muffled noises appear. I consider how language intrudes itself between bodies, in a timid, brutal, or sensual way. I try to create drawn landscapes around my home, like a necessity. There I source the stretching, deforming, upsetting the scale, transforming the drawing, even of putting it at a distance from me and from others sometimes. I tend to see the drawing as physical and mental fixture. It is in this space between the inside and outside, that I have been able to find a balance to create. 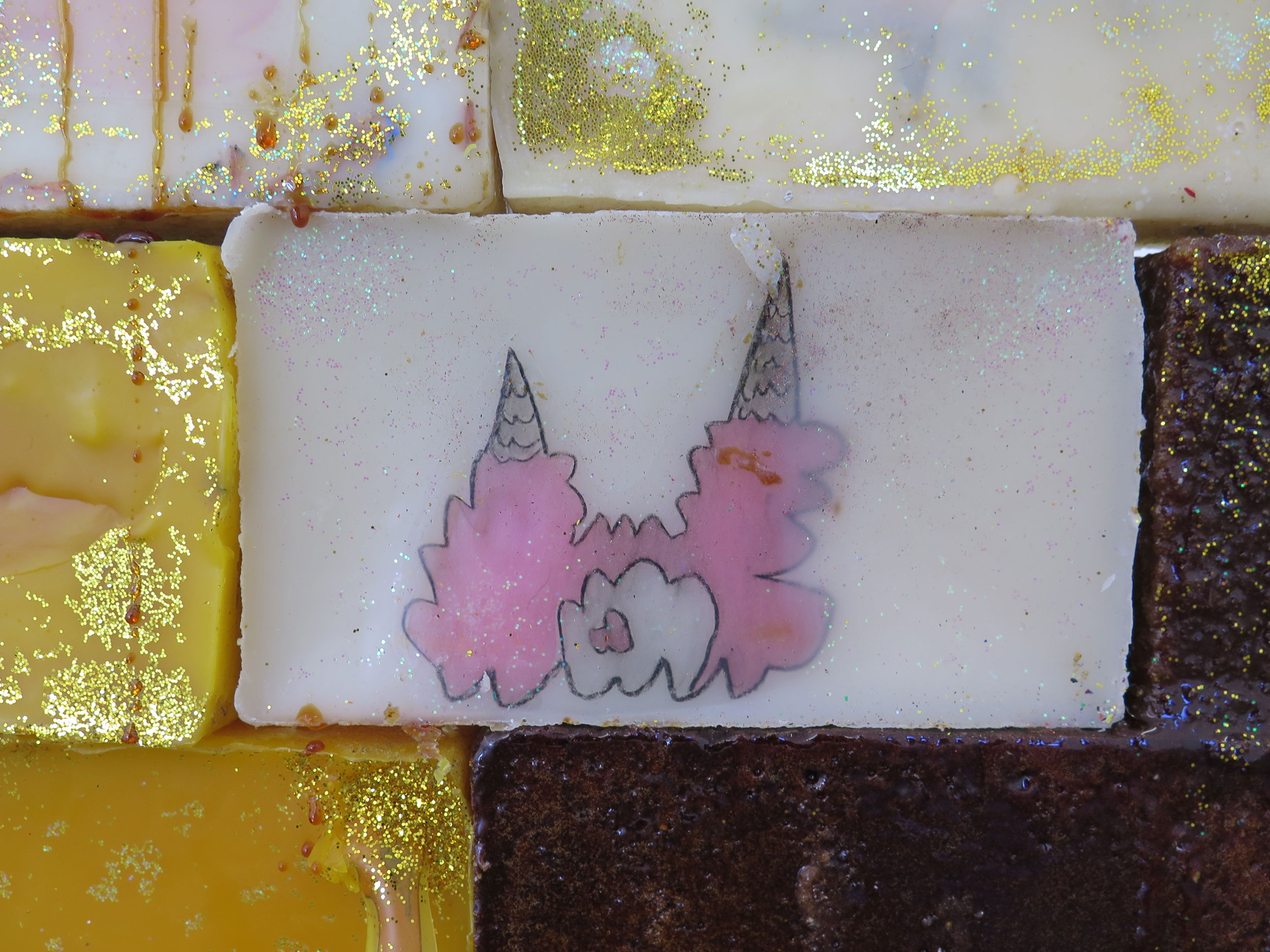 • One cannot hide that Valentine Gardiennet’s productions are reminiscent of those mornings during which one’s hangover is haunted by the memories of bad alcohol mixtures; Gardiennet does not shy away from mixtures, and especially bad ones. Her works, it is true, are seriously detrimental to good taste, to the discreet elegance of a Greek profile in white marble, to the grand style of a harmony in red and gold. There is no Whistlerian harmony in her work, no half-tones, but the frank and brilliant colours of paint and enamel; the raw tints of felt-tip and pencil, it is a debauchery of colours that hold the gargantuan feast, the gluttonous weddings painted by Brueghel¹, the banquets, carousals, and waste. Colours are mixed and drip in tints of stale meat, fried oil or abandoned garden. Confusion prevails. The jumble of colours is matched by the apparent disorder of the elements arranged in the space. It is reminiscent of all sorts of wastelands, marginal areas: countryside without luxury, roadside, messy courtyard. Margins and jumble, Gardiennet summons all that befalls in margins, the zones of non-place, transitions, erasure, in which a fictional world germinates.

She herself confesses her attraction to the “ gutter ”, the space between two comic strip panels in which time unfolds. Her installations exist in similar spaces. They are presented as a succession of intervals emphasising invisibility in the narrative, where the viewer’s imagination finds refuge and is allowed to unfold. Certain paths are offered to the eye. Linking various objects, they imply a form of narration. However, so tenuously that it does not lead to a comprehensive narrative. The installation is at most a deserted theatre stage, where the performance has come and gone. It is a theatre as Luigi Pirandello and Paul Claudel might have imagined it: a theatre made of hazards and disorder. Gardiennet’s installations stand as ambiguous places and spaces of potential narrative, even more so because they play on images known to all: animals, domestic objects, food, packaging, references to comics or popular culture. A distorted concrete block or a cartoonish sweet appeal to us because we know and handle their real counterpart3 every day. One scrambles to explain the iridescent colours of the former and the juxtaposition of the latter with a horde of sodomite mosquitoes. These objects, drawn or modelled, deformed, or transformed, are in radical contrast to the Duchampian ready-made or the Dada assemblages of found objects. Here, everything is manufactured, everything is artificial and, consequently, everything is in mutation. A mutation that takes place through changes in the scale of the drawing and also through the transposition of the drawing into volume. By transmuting real objects into her works, Gardiennet participates in the long tradition of Western
figurative art. Nevertheless, she escapes the tradition of mimesis, the imitation of real art. Indeed, the artist only offers her interpretation of objects and invites us to interpret them in turn. With each operation, the distance from the original object grows.

Valentine Gardiennet assembles her sketches into wallpapers that are an integral part of each installation she presents. They often blur the boundaries between decorative motif and landscape. Hastily pencilled, enlarged and printed on a human scale, the wallpaper motifs offer no illusion. They act as perspective-free backdrops, covered with unreal vegetation, or spotted with improbable ornaments. If you look closely, these backdrops are more than just a vulgar decoration and carry within them a complete programme of erudition and irony: motifs borrowed from Mediterranean pottery, small ghosts, tawny colours, or discs reminiscent of more than one of Paul Gauguin’s paintings. In these landscapes, there are sometimes humans disguised as Shadocks, dressed as carnivalesque dinosaurs, or dressed in the red skin of a vicious fox, perhaps escaped from some fable of Aesop or La Fontaine. In this chaos, entities can be seen for themselves, for their representation or for the representation of something else : coded languages and reference game. Gardiennet takes advantage of this apparent disorder of meaning. She proposes murky images, and messages full of gaps where other words, ideas and images can slip in. Confusion prevails.

This phenomenon, which Gardiennet describes as an “ iconographic drift ”, implies drifts of a symbolic nature. The loss of the original form is accompanied by the loss of the original meaning. The objects made can then be invested with new, more personal connotations. Petrified in clay or frozen by the drawing, they are the support of memories, reveries, or affects. Intrinsically to the entities themselves, confusion prevails. Too evasive, Gardiennet’s work is forever banned from Monday mornings, family dinners and tea parties. it is undoubtedly uncertain and ironic; but even more so, it sometimes allows some obscene detail to slip in with complacency. Obscenity emerges in the least expected corners and right behind it, death is on the lookout. Obscenity as well as death, and flesh as well as bones, no one wants to hear about it.

Valentine Gardiennet’s productions are reminiscent of those mornings where the crumbs on the table, the spilt glasses, the runed make-up, the drool on the pillow, those who sleep on the floor accompany one’s han-gover. The silence of those who drink is like the murmur of the dead.

The artist has a predilection for materials that drip, melt, slip or flow. Clay, enamel or paint, oil, grease, wax, caramel, water, alcohol, vaginal discharge, sperm, slime, sweat, blood, lymph: everything that leaks and flows. The overflowing images of liquids make us fear drought as soon as the flood is over. Everything that overflows to dry up. Gardiennet sometimes uses wax and caramel to build small structures as receptacles for her
drawings. Gradually the material melts and the construction becomes a ruin, a melancholic space par excellence. Only a few bricks suggest the ideas of decay and the grave. Immediately, the funereal invades the joyful
disorder of the work.

Death is not here by chance. It is undoubtedly at the centre of many of the narratives the artist invites us to explore, just as it is the core of many archetypal narratives, myths, legends, and epics. Travelling through these spaces is a perilous moment, no doubt a playful one, but fraught with tension. At an exhibition², Gardiennet proposed a deformed game of hopscotch, with stretched proportions. In the form of a long paper ribbon, it twisted around, laid out on the floor and against the walls of a room. In 1963, the Argentine writer Julio Cortázar had published ‘Hopscotch’³ (Rayuela), a novel that proves to be as entertaining as it is risky for the fictional characters as well as for the reader. Gardiennet’s installations function like Cortázar’s novel, with the viewer choosing to link various fragments to obtain his or her version of the narrative, but if they play, it is at their own peril.

Not unlike the “ iconographic drifts ” the artist speaks of, we could also speak of “ structural drifts ”. The reading of the space of each installation is profoundly transformed by the elements presented and the narrative imagined by each viewer. Even more than the drawing, it is this implicit narrative that distorts the spatial coherence. Structures of objects, space and storylines are violently challenged. Instead of seeking the unity of the total work of art, Gardiennet prefers random juxtapositions and chance encounters. “ Iconographic drift ” lead to symbolic drift, “ structural drift ” lead to the questioning of the authority of the articulated narrative. The availability of choices is endless, and each object proposes its utopias. Untold because infinite, the narrative does not engage. It is constantly reborn in a continual incipit. Independent although made up of the same elements, no chapter can follow another. And what seems like an epilogue is just another version of the beginning. The flies are flying. It is no longer a question of interpreting space and elements, but the margins and edges, the non-places we do not inhabit: areas of the imaginary that we do not
conceive.